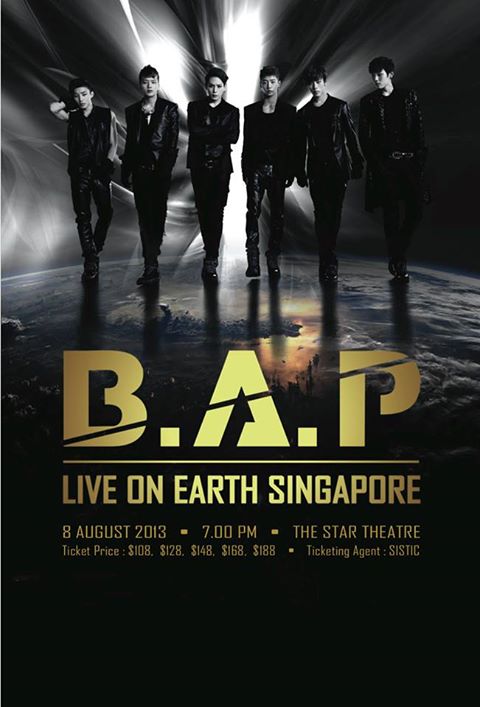 K-pop fans can look forward to some celebrity-spotting in the month of August when hip-hop boy band B.A.P heads to City Square Mall on 7 August for the “B.A.P Live on Earth Singapore” press conference.
Short for “Best. Absolute. Perfect”, this outstanding group of six talented members have won 15 rookie awards from around the world and were featured by the Grammy’s in their “Snapshot: Best of 2012” alongside Psy – an extremely impressive feat given B.A.P’s debut in 2012.  They will be performing at the Star Theatre on 8 August with Singapore as the final stop of their Asian tour.
As the official shopping mall for the “B.A.P Live on Earth Singapore” concert, the SISTIC booth in City Square Mall will be the first to commence ticket sales on 7 July 2013 at 10am, one day earlier than all other SISTIC outlets or online sales. The first 200 to purchase their tickets will receive an exclusive B.A.P poster during the pre-sale at City Square Mall. Be sure to grab your copy then!
In addition to early bird sales, City Square Mall will be giving away 45 pairs of “B.A.P Live on Earth Singapore” concert tickets (worth S$336) from 7-14 July. Simply be one of the first 45 fans to spend a minimum of $100* at the mall and tell us what ‘B.A.P’ stands for at the Customer Service Counter to redeem your tickets*.
What’s more, K-Pop music lovers can see B.A.P during their Press Conference at City Square Mall, Atrium A, at 7.30pm on 7 August 2013.  The first 500 fans at the event will receive an official “B.A.P. Live on Earth Singapore” concert poster.
For more details on the activities and promotions, visit www.citysquaremall.com.sg or check out City Square Mall’s Facebook page www.facebook.com/citysquaremall.
*above: Press release provided by SPRG
-
Omg B.A.P is coming!! I love their songs!! If you are a Kpop fan, B.A.P will not be a foreign name to you as they are very popular on music chart shows and variety shows. I love how they're different from regular boybands - they're very fashionable and themed. Their music is also very different from the usual pop genre in Korea as they go for a more hip-hop and beasty style. (And I really love awesome Korean rappers!!!) These are my favourite songs~

Warrior was the first song I heard from them. Frankly, it left an impression on me cos all of them were blonde :P Love the powerful raps!

And their next release was an awesome one too (ooo love the dance)! I liked it more than Warrior! But my favourite song is..

This is my favourite song from them! Catchy but most importantly, they're SO CUTE.

I hope to see them soon in SG and you should totally get the tickets with the freebies while you can ;)