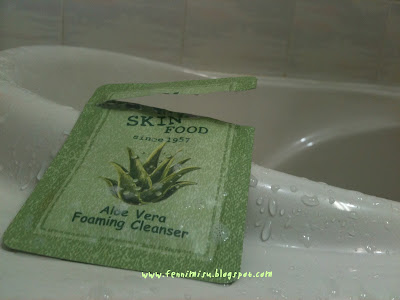 So I got this sachet of Skinfood's Aloe Vera Foaming Cleanser from some random stuff that I bought. It's pretty a lot of product, for a sample. I used it 3 times, but I threw it away before it finishes so probably in total it's usable for 5 times? Because its a foaming cleanser, you'll only need a lil and then lather up. That simple. 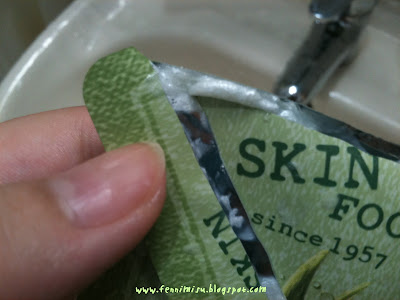 It's a silvery colour. Nothing wrong, just a lil insecurity... :P

-Lathers up pretty quickly, into a nice lovely foam
-Pretty thick consistency, so you'll only need a lil!
-Smells.... like clean & clear's daily soft cleanser. HAHA
-Clean refreshing feeling afterwards, but the feeling goes away in like.. 10 minutes.

Its the same kinda clean and tingly feeling most cleansers give after washing with it. However it lasts for only awhile, like a few minutes. After that it feels normal. It's probably effective in oil control for only a few minutes..? Haha that's worse than my regular cleanser! And after using it for 3 times, there's no significant change, compared to the amazing egg soap from Holika Holika. Perhaps its not for my skin type, not for me, not effective for me only but all in all, it just doesn't work as well for me. In other words, this is a moisturizing cleanser. Would work for people with drier skin :)

Not for me though.