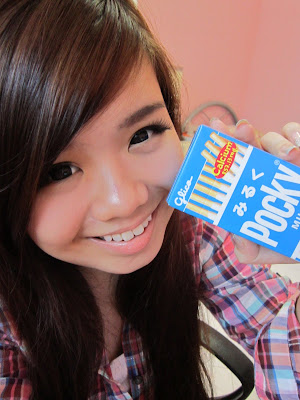 Milk Pocky rocks!!!
And for some reason my skin has a posterize effect even though I didn't use any effect or PS. Looks damn fake :/ Shall not use auto mode again wahaha
Hello!!!! Its been 3 weeks of school, and its getting more and more interesting but tiring. The most tedious module is probably Art of Story. I'm not one bit literate (Shakespearean works or Lord Of The Rings...) and have no idea who is Persus or where is Athens, neither do I watch a lot of English movies or read a lot of storybooks. Afterall its how you overcome the difficulty right? muahaha that's the fun part I guess. Oh and Drawing! I havn't done the homework :P
I went to an event by Wong Li Lin to promote her exercise band, the Loopz band! My limbs ached like hell after that hahaha. Will blog about that soon :)
And I went to a rally for the first time in my life!!! A very cool experience!!! Anyway it was Worker's Party's rally that I went to, the one at Yishun stadium for the Nee Soon GRC. Went with hpility/ Hong Peng! Check out his post here!
-Giveaway closed-
And a new cover! f(x)'s Pinocchio!
[the following that I blabber about the cover may not interest you]
Hana thought one cover of it on YouTube was mine but actually I didn't really like the song yet :x So I thought of doing one too. Its a challenging song because the lyrics are really difficult! And the most difficult word to pronounce in this song goes to... eui-sasonsengnimeun! SA-SON-SENG-NIM. Its difficult cos the last letter of each syllabus is different. (maybe im just dumb) And there's my greatest obstacle in songs - the rap! And also Luna's voice is sharper and the highest note is really high and sounds bad with falsetto so I used my real voice! Finally got it with many takes. Muahaha. Click here or the YouTube vid on the right to listen :D
Takecare :)