I give my first love to you 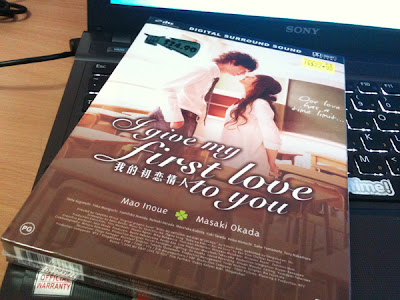 Takuma (guy) and Mayu (girl) are childhood friends. Takuma lives in the hospital where Mayu's father is the doctor, due to his heart condition since birth. They were very close and eventually became each other's first love, at a very tender age. While they're still kids, they overheard their parents talk - Takuma has a heart condition and couldn't live past 20. Mayu became greatly sad and looked for a four-leaf clover and prayed that Takuma would be able to grow up with her. Takuma promised her to grow up healthily and marry her. However, as they were in junior high, he felt that Mayu would be very sad after he dies, so he tried to avoid her by getting into the top high school, expecting Mayu not to make it. However, she was the top scorer that entered the school. So their fate did not just end there. Mayu represented the freshmen at the opening speech since she was the top scorer, and talked to Takuma infront of the school, saying that he can never dump her and she hadn't forget their promise. Because of that, both of them were well-known in the school. So they were still together schooling for some time, until Takuma went back to the hospital for his usual check-up and met a girl with the same heart condition as him, Uehara. He did not like that girl, but considering that she would pass on soon, he tried to make her happy by giving her flowers and even her first kiss. This made Mayu extremely unhappy. Afterall, Takuma's wish is to break up with Mayu so she would forget him and would not be sad about his passing on. So Mayu said to breakup with Takuma, since this is what he wished for. So they were broken up. And then along came this guy called Kou whose father passed away due to the same heart condition as his father, and he feels very sad for his mother who is left behind. He falls for Mayu who is now single, and tells Takuma that. He tries to get Mayu's attention but Mayu still likes Takuma. Takuma goes to the hospital to see Uehara again, only to find out she passed away that morning. He thought about his actions and saw all his memories with Mayu, and he wants to get Mayu back. He challenges Kou to a 100m sprint, even though running is a very dangerous thing for him due to his weak heart. He wins and decided to go find Mayu for a night date in the campus. She agrees and they got back together. Kou gives them his blessing, saying he's seeing another girl already. Kou skipped school to visit his girlfriend, and was knocked down by a vehicle while leaving her house. He became brain dead a.k.a vegetable. At the same time, Takuma's heart condition worsens and was rushed to the hospital. The doctor told his parents, his time left isn't much and wants them to be with him. Kou has an organ donor card and his heart was to be donated to Takuma, but he didn't know till students of the same school went to his room to look for Kou mistakenly. Takuma found out and decided not to have the heart transplant. Kou's family decided not to give Kou's heart too, as Kou showed signs of life still, like shedding tears and minor movements of his finger. Takuma sneaks out with Mayu and went to a themepark to play and enjoyed the day thoroughly, as their "honeymoon". However he feels that he couldn't make it anymore and went back to the hospital at the end of the day. Yes, he indeed could make it no more. Mayu went to beg Kou's family to let him have his heart, but to the family, everyday is a hope that he'll come to. o Takuma could not be saved and passed away. Mayu married the ashes of Takuma in a church shortly after. Seemed kinda scary but.. Love :) She said that if she were to meet Takuma again in her next life, she would still go through all these even if she knew the ending. That's like the ending dialogue and supposedly the most impt sentence in the movie, hahaha.

Sigh. Its so not touching, the way I say it. But in the show, it's super super super sad. Makes me treasure my life very much more. Somehow Japanese movies have this thing of someone getting a disease and dies lol. Koizora especially. Its like anextended version of Koizora since Takuma and Mayu were childhood lovers instead of meeting in school like Hiro and Mika, but somehow with a similar ending of the guy dying of a disease.