Jamie & I went to the 夏祭り (Natsu Matsuri) or Summer Festival in the Japanese School, Changi! Its so crazy.. Sat in the scorching Sun since 12 or 1 plus till 4 plus! I got tanned :( But keke we sat on her poncho and used my umbrella for shelter, cool. Somewhat more lucky or luxurious than the other queuers :P Met some new people while queueing, no pics though. Brandon, Mindy and I-forgotten-his-name. Played Monopoly Deal with them. It was totally Greek to me but got on track pretty fast. Keke. Worst thing: many inconsiderate people simple cut out queue! Like they went infront and stood by the sides till the gate opened. We got so agitated and angry, cos we suffered for so long and they simply cut the queue? Hais.. Some people were alrd in yukatas, and their makeup was melting :P Yea so finally the queue moved and daaaang, bought a game ticket each and an entrance ticket. And daaaaaang, queue again! Aww, we didnt manage to rent yukatas so it all sucks maaan. Sucks, very very much to the core. 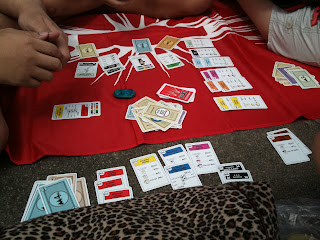 Monopoly Deal! Check out my assets :D
So we bought food that looked yummy and decided to dine buffet style (buying different food and drinks and at last eating them). Hahaha the apple vinegar jelly drink was so good! Ommo. The rest was.. below standard. Like we can get much better tasting ones outside, prices alike or cheaper. Oh ya, we were queueing for chocolate "Pandayaki" or Dorayaki in panda shape. Then I asked one Japanese guy in soccer wear, "takoyaki?" cos I was looking for tako. He said "no, no. Pandayaki!!! Pandaaaa *makes panda ears*" so okay, Pandayaki it is. And cos he was like singing loudly, I asked, "hatsukashi?" (shy?) and he replied "nono, daijobu" (I'm fine) LOL fun talking to Japanese eh. And we bought this cool drink called Kids Beer, cos its beer for kids and we are kids, like not legal to drink yet. So we found a spot to eat and yea, the food sucks. We got some Japanese fried rice, fish X cheese balls, takoyaki, kids beer, apple vinegar jelly drink X2, "Pandayaki" in chocolate flavour, fried chicken and sweet beancurd skin sushi. Hmm, the sweet beancurd skin sushi was acceptable and the rest was waaaay below standard. 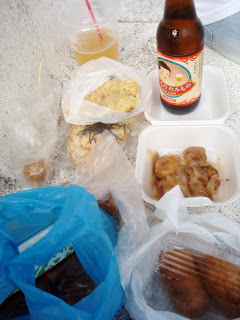 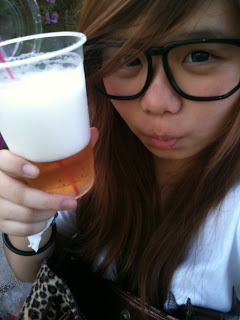 Really looks like beer right! The colour and the foam~ And I look drunk/ cui from the queueing and HUMIDITY. Seriously.. Its so hot that we didn't wear any makeup.. 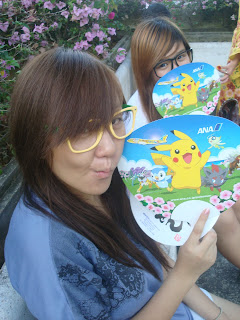 Jyaaa, ANA Pokemon fans~ We took this design of fan cos its the cutest!

Met up with Cheris while eating cos she was there to do duty, like to clean up the place after the event. Aww, sucks, I know right. Like since it was 5+, we decided to leave that place at 6 to go for Baybeats. But we still had our game coupon we bought for $2!!! So yea, anyhow throw and tata. Consolation prize of a jelly :D Bought another cuppa apple vinegar jelly drink cos it rocked. Took pic with a Jap guy in soccer jersey~ 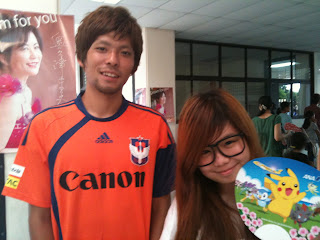 me: photo?
him: okeh *nods*
Oh and we saw Simin and her bf! And also Rhyn while we were queueing. He actually came and queued at 9am, hardcore (Y)(Y) And Simin blew my neck when she walked past me the second time, kinda shocked me keke. 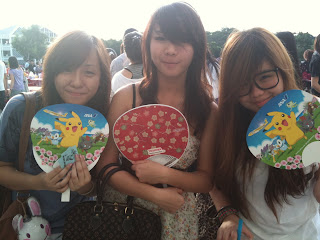 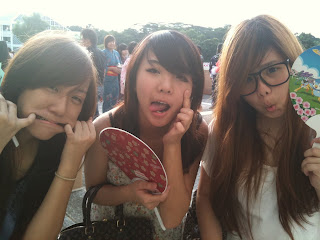 *makes faces*
Ruuushhhhhhhed to Esplanade and yea, slept a lil in the train. So tired omfg. Yeaaaa and we managed to catch David Choi's last song for that performance, That Girl. And yessss my fave song of his. So catchy and :')
Overall, Natsu Matsuri sucks. Okay it doesn't suck but maybe just.. Not worth us queueing that early and get tanned and stuff. Since its like sponsors and external vendors selling everything inside. Kinda pricey. Like a character mask where they sell in pasar malams for maybe.. $2? They sell it at $8 inside, wowww. And the takoyaki is $3 for 4 small balls with damnnn less not-even-visible sauce. I thought that it would be a lot better if it was an all-Japanese authentic festival, like the vendors would be real Japanese preparing the food and such. I don't mind paying more to get a taste of Japan here, in SG. Afterall its a Japanese festival.. The food's just.. Much suckier and pricier than outside. Not worth it. Maybe I wont be going next year.. Or maybe try to volunteer to do something there like just, not as a patron. Keke.
Tataaa!